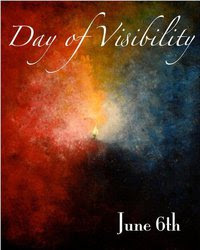 I saw Avatar back when it was in theaters. It's not the kind of movie I usually go out of my way to watch, but I wanted to find out what the fuss was about.

Essentially it was just a big dumb fun popcorn flick, not nearly as profound as it was trying to be. Still, one line caught my attention.

This was a phrase used by the Na'vi, the big blue alien characters. It carried a world of meaning. I see you. I acknowledge your existence. You are just as important as any creature that has ever lived.

I wished the entire movie had been better, to be worthy of that one sentiment.

* * *
Today, June 6, was Day of Visibility for Invisible Diseases.

A disease is called invisible when it isn't readily obvious that the people who have it are sick. Nobody sees them when they feel their worst because they're too ill to go anywhere. When they have a good day, good enough to venture out into the world, they don't look sick and everyone assumes they must be fine.

And when sufferers claim they are NOT fine? The healthy people in their lives often assume they must just want attention and sympathy.

Many people with ME/CFS, fibromyalgia, chronic Lyme, POTS, MCS, and other diseases learn to keep quiet. Day of Visibility gives them a chance to come out of the closet, knowing that fellow sufferers are also putting themselves on the line.

I hope that a lot of sick people took the opportunity.

I hope that when they did, their friends and family said, "I see you."
Posted by cinderkeys at 11:05 PM

You are so awesome, Cinderkeys. I just wanted to say that. :)

What a great post. I see you. :) A foremost expert on CFS, Dr. Jacob Teitelbaum, has just put out a new book called Beat Sugar Addiction Now: http://endfatigue.com/. It is written in a simple style and outlines his easy to follow, multi-step plan. He begins by identifying 4 main types of sugar addicts and then outlines a specific plan for each type of addict to follow. He explains how sugar plays into the problems suffered by each kind of addict and goes into detail when clearly and succinctly explaining how to beat the cravings. While Teitelbaum does not provide recipes or meal plans, he does give guidelines for healthy eating and lists of recommended foods as well as the glycemic index for many common foods.This book would probably be helpful not only to people attempting to lose weight, but also to those with illnesses such as Type II Diabetes, Fibromyalgia, and Chronic Fatigue Syndrome, just to name a few. Though Teitelbaum is a medical doctor and is clearly coming from a medical background, he writes in layman's terms and creates a book that will be easily understood by most people.

Thanks, Laurel. You give me far too much credit, I think, but I appreciate it anyway. :)

Roberta: I know someone who radically changed his diet in the face of this disease. He hasn't touched sugar in years. Though the diet has improved some symptoms a tiny bit, it hasn't helped the underlying problem. So far, my money's on dealing directly with the virus. :)

I hate to be a wet blanket (oh, all right, I love being a wet blanket), but "I see you" is not much of a line at all in my opinion (I agree with your assessment of the film in all other respects). The phrase reminds me of its close relative, "I hear you." Have you ever noticed that whenever someone says, "I hear you," what he really means is that he disagrees with you?

I realize that I am attacking the linch pin of the point you are making, which isn't a good thing, since I like what you are saying. I just wish you hadn't seized on such trite fluff to make it.

Sorry to be so negative (oh hell, I love being negative).

What can I say? The line affected me on a level it didn't affect you. I wished it were a real thing that people said to each other, corny and earnest as it was.

I see you. It is perfect in many ways. For people who feel invisible, this can be very powerful. Great posting!!!

THANK YOU for letting us know about Day Of Visibility too! It is brilliant to have a day for invisible diseases. I have to find it on facebook now!! Thank you!