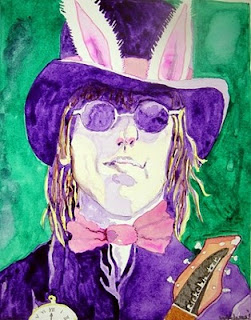 Wendy Adams is an amazing musician who lives in Tucson. She used to gig all over town and give voice lessons; she was my first vocal coach. When health problems made it impossible for her to continue performing, she turned to art as a creative outlet.

Much of Wendy's art has a musical theme. Up until recently, her gallery featured a bunch of watercolor and pastel portraits of famous musicians. She's since taken those off the selling block. In Wendy's own words:

I finally got a little legal advice today (very concrete) about the workings of copyright, personality rights infringement and the use of celebrities likenesses in art not commissioned by the celebrities themselves. You can DO it. But you can't do it and sell them without permission. I have removed all art depicting celebrities from my studio.

I had known that if you took a photo of someone, you needed permission to sell that photo—a model release. Which makes perfect sense. A photograph is an exact visual representation. Selling it without the permission of everyone in it would be a violation of privacy.

The way I see it, when somebody draws or paints you, whatever ends up on canvas isn't you anymore. It's an image of you filtered through the artist's interpretation. The artist owns that, just as much as she owns her thoughts and feelings and beliefs.

Of course, I'm coming at this from the perspective of someone who isn't famous. I suppose if Cinder Bridge hits the big time, I might theoretically become irked that someone's making money off my likeness. I'm the one who spent all that sweat equity building my personal brand, right? If an artist profits from the celebrity I've worked so hard to earn, I want a cut!

Theoretically. In reality, I don't think any of that would occur to me. It would be a nice ego stroke, knowing people wanted paintings of me on their walls. Or, if I reached the point where I became too jaded to care, I'd probably be making so much of my own money as a famous person that I wouldn't need the extra cash.

At any rate, I'm kind of fascinated by the implications of such rules, and how they apply.

I don't know, maybe I'm missing something. Is it just me? Or does this little piece of copyright law strike anybody else as odd?

* * *
Note: Tom Petty's Halloween by Wendy Adams is used here with her permission. She tells me that it's legal for me to post the image as long as there's no money involved.
Posted by cinderkeys at 8:27 PM

Not just your voice is copyrightable. I don't know if you remember, but several years ago (in the 90s, I think), Bette Midler sued the Ford corporation. They had approached her to use a song she'd made famous, but she refused to let them use her voice. So they hired a sound-alike singer. Midler sued for infringement, saying that Ford gave the mistaken impression that she endorsed their products, and won. This would have had farther repercussions had more musicians any scruples about selling their songs for commercials.

Correction: Not just your face, but your voice is copyrightable.

I hadn't heard about that case, but it makes sense. They didn't hire a sound-alike to do some song because they wanted that style. They were implying that Bette Midler endorsed their product.

Same deal with visual likeness -- say, if Tom Petty up there had been holding up a box of Cornflakes. I just don't understand why it's a problem when all you have is the portrait.

Your image is copyrightable under California law:

I am certainly no lawyer, but I cannot believe that an artist has to get a celebrity's permission in order to sell a painting of that celebrity or a photograph of that celebrity. After all, the paparazzi do that all the time, and the only time they get into real trouble is if they sell topless pictures when a woman is sunbathing in her own residence.

What celebrities do have is the right not to have their image used in advertising. That is an entirely different thing, and Bette Midler was quite right to stop even an impersonator from giving the impression that Midler was endorsing something. But I have heard plenty of ads where a mimic was used to copy someone's voice, followed by a disclaimer that it wasn't the celebrity's actual voice but that of an imitator.

I think Wendy could sell those paintings. She just cannot use them to advertise products.

Yep. Rule of law. Those who rule make the laws.

The suit against the manufacturer making the Steve Jobs doll (from Anon's link above) doesn't make me scratch my head as much. Somehow it seems more exploitative when a corporation uses a celebrity likeness without permission or without giving the celeb a cut ... but that isn't terribly consistent of me.

It's a little scary that anyone would WANT the Steve Jobs doll, but that's a separate issue. ;)

Adamsart restated her position, but it makes no sense. How could the paparazzi sell photos and films of celebrities not only without their permission but expressly against their wishes while an artist is not able to sell works of art? Does anyone think that all those pictures of Mel Gibson foaming at the mouth are done with his permission?

Ahhh, but the press get a free pass. As to those that do it and get away with it, that's one thing. That doesn't make it legal, or o.k. to do. Now that I know what I am doing is against the law I won't continue to do it. The press get away with it, cartoonists also get a pass. I will come back with examples of the law and who gets a free pass but I think what I have already poasted and what anonymous has posted are pretty clear.

Wendy is the one who talked at length with the lawerly types, so I have no doubt that her information is true. Whether it's fair is another story entirely. Why DOES the press get a free pass? More specifically, why do the paparazzi get a pass when they aren't employed by the press -- they just sell their photos (commercial use!) to the press on a freelance basis.

Another similar issue: There are many greeting cards out there with politicians' pictures on the front and a funny message inside that totally demeans that politician. They certainly didn't give permission, but their image is being used to sell cards. John thinks an exception is made for satire.

I think he's right -- satire is protected, which is why everyone at Mad Magazine didn't get their pants sued off with every issue.

It's kind of funny that you can sue a person for using your likeness in a positive way, but not for ridiculing you mercilessly. :)

As a matter of fact, I believe that Mad Magazine was involved in a suit a long time ago which made law on these issues, but I don't remember the particulars. They probably told everyone to sing some song to the tune of some other song.

Well, Dad, if you feel like making some First Amendment art, then taking the case to court, be my guest. Right or wrong, the celebrity whose likeness you've used will probably have a lot more money to throw at lawyers than you do.