Reflected in your eyes 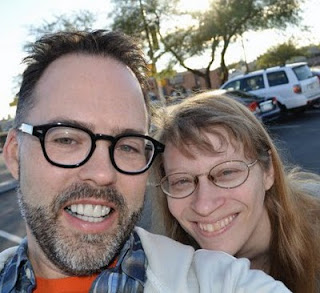 I met Brian in music camp, when I was 16 and he was 17. We both ended up at Indiana University and stayed in frequent touch after graduation, seeing each other through various crises.

For one reason or another, we mostly lost contact around the mid-'90s. I thought about him every now and again, telling myself I should try to find him.

Eventually he found me. He was going to be in Phoenix over Christmas. Would I be around? If yes, he'd drive the two or so hours to Tucson and we could catch up.

Seeing Brian was something. As we filled each other in on the intervening 15 years, it felt as if we'd last hung out a week ago. He hadn't changed at all, except to become a more fully realized, confident version of himself.

The strange part, though, was the feeling that I hadn't changed.

After leaving graduate school and settling into what I'd consider my real, adult life, I'd faced unforeseen challenges. Challenges I failed again and again to overcome. By December 2009, when I reconnected with Brian, failure had inserted itself into my DNA. I'd gotten used to seeing myself as somebody less, somebody who always fell short.

I think I'd forgotten there was a difference.

Brian left town shortly after that visit, but the experience stayed with me. I finished the song it inspired a year ago today. It's called "Ten Years Later" because "Fifteen Years Later" didn't scan.

This little live-in-Ron's-living-room scratch recording goes out to Brian, and to all the other friends who've stuck by me through the years. Here I am, reflected in your eyes.

Take in the scene
With fresher eyes
Oh, I've got every street sign memorized
And still I feel somehow I've lost my way

CHORUS
Once I stood before your camera
Gave a smile, struck a pose
Facing fearlessly the future
As the past drew to a close
But the choices that I made
Were not the ones I thought I chose

CHORUS
Once I stood before your camera
Gave a smile, struck a pose
Facing fearlessly the future
As the past drew to a close
But the choices that I made
Were not the ones I thought I chose


CHORUS
And I'll stand before your camera
Give a smile, strike a pose
Facing fearlessly the future
As the past draws to a close
And the choices that I'm making now
Well no one ever knows

Looking at that wonderful snapshot, you are both as I remember...thank you for posting, and for the pleasure of the beautiful song from within.

Really enjoyed reading this. Love the lyrics, can't wait to listen to the song (in an office right now, and my laptop speakers just would not do your song justice!).

Thanks, guys. :) It was a pleasure to get a song out of something so good.

@Jeff: It really is a scratch recording. Your laptop speakers would probably do the recording as much justice as any hi-fi system. :)

I just sent a comment, and it disappeared somehow. Sorry this is so late, but the song is too good for me not to say something.

The lyrics are just terrific, and I especially like the way the chorus develops at the end. The tune carries the lyrics quite well, and the entire song expresses a truth I hadn't thought about, at least not consciously.