My friend Neill managed to get a pretty good photo of our Green Valley gig. It may be the only snapshot we have in which my face isn't obscured by the mic. Yay instrumentals! 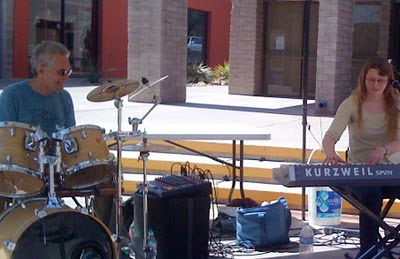 Some background: I do book design by day, and every once in a while I make geeky posts on Facebook about fonts. Sally knows a fair bit about typefaces herself and often comments on those posts. So when she made up the card, she used Comic Sans and Brush Script. I told her that if she'd really wanted to be obnoxious, she would have thrown in Lucida Handwriting.

If you're a font geek, you know why this is funny.
Posted by cinderkeys at 11:26 PM

OK, but since we aren't font geeks, why don't you let us in on the joke. I realize that explaining a joke ruins it, but even that is better than not getting it at all.

You owe it to your adoring fans.

Comic Sans (the typeface used for my name on the card) is widely mocked among font geeks. Some simply hate it. Others believe it's used too often used inappropriately.

There isn't so much hatred for Brush Script (the font for "Rock Star"), but it's kinda ugly.

Yeah, I was right the first time. Really not funny when explained. :)

Maybe that's because it isn't that funny.

I have no idea why anyone dislikes either of the fonts that were used.

I don't have Lucida on my font set, but I do have Lucida Grande, and it looks just fine to me. I tried to paste a statement written in it, but it printed in the same font that is used here.

It's nice to know that there is a subculture of font geeks out and about in the world.

I know! I was such a Lucinda handwriting freak before I knew fonts.

Yay, for non-face-obscured-by-mike shots. Good one!!