Making my way through Sunflower's frozen meat selections, I sing along with Supertramp. Softly, on and off. Just because I like singing in grocery stores doesn't mean anyone else wants to hear me.

The song isn't in my range. Even the people who've paid to hear me sing wouldn't listen now.

Now's the time that we need to share
So find yourself, we're on our way back home

I notice him in the produce section while scoping out cabbage and celery. He's a few feet away, shopping with his wife, also singing along. Quietly, surreptitiously.

See the man with the lonely eyes
Oh, take his hand, you'll be surprised

I sing a couple of lines to the guy, loudly this time, looking right at him. He smiles. Says something about it being a good song.

Another brief connection, made possible by music.
Posted by cinderkeys at 12:01 AM 2 comments:

Ooh, look! Don Martin and Courtney Ludwig did a write-up on the Concert to Aid Victims of the Southern Arizona Fires for BScene Live. Cinder Bridge gets a mention in the seventh paragraph:

Listening to and photographing Cinder Bridge, a two-piece band, which included the vocals and keyboards of Susan Wenger and the percussion of Ron Amistadi was very intriguing to me. Susan's voice had the sound of folk mixed in with the vocals of Melissa Etheridge. Ron’s kit was simple, yet with so many sounds were produced with the use of "Hot Rods" (the drumsticks he was using) which made for a lighter sound.

Also, kudos to Don and/or Courtney for knowing what hot rods are.
Posted by cinderkeys at 2:46 PM 1 comment:

Songwriters in the round 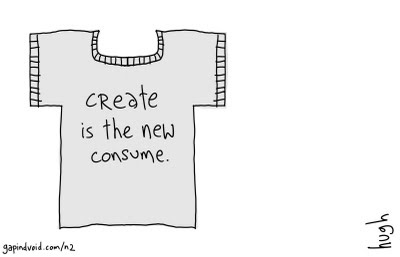 Image by Hugh MacLeod, Gapingvoid.com
CC BY-NC-SA 3.0
I wasn't sure I wanted to go.

Duncan Stitt, a fellow songwriter and keyboardist, had invited me to something called "Songwriters in the Round." The format: A bunch of songwriters meet somewhere—this time at somebody's house. Three get up on stage at a time, taking turns performing their original songs. You can bring a set list if you want, but to really have fun with it, you're encouraged to decide what to play on the fly, based on what the performer before you sings.

I love everything about this kind of gathering. I love hearing other people's songs, finding out what inspired those songs, and sharing my own. It's just ... I was tired. I'd come home from rehearsal, cooked a meal, and felt like I was done for the night. The best going-out option I could imagine was to see a movie with friends. The only thing I'd be required to do is sit and stare at the screen.

I was more in the mood to consume than perform.

But gatherings like this don't happen often—especially ones in which somebody else brings the keyboard—so I sucked it up and dragged myself over. And within five minutes of arriving, I forgot about ever feeling tired or antisocial. Good times were upon us.

The experience of the small group varied widely, from a guy who'd never played in public before to professional songwriters who'd successfully sold their tunes in Nashville. But everybody was interesting and friendly and good to talk to. Everybody had songs that were worth listening to.

* * *
If you're a songwriter who lives in or around Tucson, you can get in on the next Songwriters in the Round. Go to www.meetup.com/songwriters-tucson and join the Meetup group. Don't worry if you're not an experienced performer. The guy who'd never played in public before almost didn't show up due to nerves, but afterword said this was probably the most fun he'd ever had with his clothes on.
Posted by cinderkeys at 2:20 PM 4 comments:

I tend to float through my days blissfully unaware of pop culture. Keeping up with music news isn't a big priority. Despite that, I found myself surprised to learn that Barry Manilow had debuted a new album in June—his first collection of new material in a decade—without me noticing. I was a huge fan of his back in the day, so ...

What? Why are you looking at me like that?

Anyway, the album, 15 Minutes, is apparently somewhat of a departure from his usual style, more guitar-driven than his previous work. I checked out a few clips on Amazon.com, and ...

"What are you singing?" I asked.

It seemed like a reasonable question to me, but my friend Tina could hardly believe it. I'd never heard "Copacabana"? I'd never heard of Barry Manilow? My awareness of pop culture at age nine wasn't much better than today, so yes on both counts.

Not long after that conversation, I caught "Copacabana" on the radio and listened carefully.

"It's a pretty stupid song," I told Tina the next day. "And you sing it better than he does."

But for some reason, "Copacabana" started to grow on me. Enough that I asked my mother to buy me the album when I was home sick. She brought me back a copy of Even Now, and I wore out my little kiddie record player's needle on "Copacabana." Every other song on the record was a keeper too. Soon I was spending countless hours in the living room, parked in front of the stereo, listening to Barry Manilow's Greatest Hits.

What wasn't to like? Catchy melodies, heartfelt lyrics, great piano arrangements—Barry Manilow had it all.

Alas, other members of the household didn't share this assessment. My mom mostly tried to ignore the music, if memory serves, but my dad was not one to suffer in silence. We had constant battles over the volume when he got home from work. I had no idea how funny this was at the time. I could have blasted Judas Priest at them. I could have spun Led Zepplin backwards, trying to find satanic messages. I'd say they didn't know how good they had it, except that they probably would have preferred the satanic messages.

Anyway. Somewhere around the age of 11, my musical tastes went in a different direction. I started listening to the "adult contemporary" station whose format would today be considered classic rock-ish. I discovered Chicago and the Eagles. A friend introduced me to "Hey Jude" and it blew my little mind.

Barry Manilow fell by the wayside. This wasn't a conscious decision on my part. I wasn't convinced by my parents and other naysayers to stop liking him—in fact, I never really stopped liking him. I just moved on.

* * *
Home alone one night, flipping through radio stations, I came across a Barry Manilow song—"Weekend in New England," I think—on Lite Rock 94.9. Yay! I was in my 30s at this point and hadn't heard him in ... I couldn't even remember how long.

All these years, I'd assumed everybody made fun of Manilow because he was sappy. But no. At long last, I heard what everybody else heard. The earnestness. The lack of any kind of edge combined with a dropping of the Gs ("yearnin'"). The highly produced arrangements, complete with violins and soft brass.

Bring them all together and you had a perfect storm of cheese.

After the first shockwave of realization, a discomfiting thought hit me: If there was a time when I could listen to this and not hear the cheese, it was because I hadn't been filtering it through a half-dozen layers of cynicism.

There was a time when those layers simply didn't exist.

So now what? Would I join the ranks of all the people who made fun of Barry Manilow's music? Chalk up my previous adoration to not knowing any better?

I didn't want to. I couldn't. Those songs were my friends when I didn't have a lot of friends. They made a long, rough patch of childhood a little more joyful. Who can ask any more from music than that?

Besides, love him or hate him, you couldn't doubt the man's sincerity. He meant every word he sang. He performed the way he did because he wanted to, not because people considered his sound cool at the time. Hell, even at the height of his popularity, Barry Manilow was never cool. He was just Barry Manilow.

Above all? I wanted to preserve that kid who hadn't yet grown all those layers of cynicism. Who could listen to the earnestness and the dropped Gs and the violins and just accept his music for what it was intended to be. This went far beyond nostalgia. If I treated Barry Manilow like a joke, those last vestiges of my innocence would dry up and blow away.

So I decided. And to this day, I still smile when I hear one of his songs.

And I'm buying his new album, dammit.
Posted by cinderkeys at 8:27 PM 12 comments: