So you're dying to experience Cinder Bridge's TFF show, but you simply can't make an appearance due to distance or illness? Fear not. We have options. KXCI is going to record all the performances from the Plaza stage and broadcast each one an hour or so after it happens. That means we'll go on the air Sunday, May 1, sometime between 2 and 2:30 p.m. MST and play until between 2:25 and 2:55 p.m. MST.

I'm psyched about this, not only because of the greater exposure for the band, but also the opportunity to get a soundbite out for ME/CFS advocacy. We're going to play "Everybody Knows About Me" in the middle of our set.

Here's how to tune in online:

If you've never listened to streaming radio before, I'd recommend that you try following the above instructions before the appointed time. These sorts of things are easier when you're not under any pressure.

Again, broadcast times are pretty loose, but they'll probably play us an hour to 90 minutes after we perform live, with our first song starting between ...

If you're in Tucson and want to kick it old school, turn on your radio and tune it to 91.3 FM. But if you're in Tucson, we hope you can see us live and in person.
Posted by cinderkeys at 10:45 PM 2 comments:

The Tucson Folk Festival is upon us. This extravaganza of acoustic music will go all weekend; we play on Sunday.

If you're in Tucson, or if you're within traveling distance of Tucson, here are the pertinent details you need to see us:

We hope you can make it. The TFF is a really good time, and you will enjoy yourself.

What's that? You live too far away? Travel is impossible? Read on ...
Posted by cinderkeys at 10:28 PM No comments:

What draws us in

"What sorts of things do you look for in deciding what music you like?" asked Facebook friend Don. "Technical ability? Lyrics? Etc.?"

An interesting question. The quick answer would be that all of those things are important. A more accurate answer is that it depends on the song.

For instance, back in 1995, a friend turned me onto "You Oughta Know" by Alanis Morissette. I was putting together a mix tape of breakup songs. She informed me that "You Oughta Know" had to be on it. She quoted some lyrics:

And every time you speak her name
Does she know how you told me you'd hold me
Until you died, till you died
But you're still alive

Morissette's raw, angry lyrics expressed my raw, angry emotions perfectly. They pulled me in. The music? By itself, it was nothing much. The melody didn't do anything for me. Morissette hadn't quite mastered the art of singing yet. But that didn't matter. The music fit the words. And yes, she made it onto the mix tape.

On the other end of the spectrum are tunes like "Love Rollercoaster" by the Ohio Players. I was listening to this gem the other day in the car, singing along, and it suddenly occurred to me that most of the song only consists of two phrases. These are:

Your love is like
A roller coaster, baby, baby
I wanna ride

Without having to ask, I know that Don would hate this. His tastes run toward songs that tell stories and contain deep metaphors. He likes Bob Dylan and Paul Simon, and, yes, Cinder Bridge. Songs with inane lyrics over catchy melodies make him run screaming, hands over his ears. I can respect that.

On the other hand, could you even imagine "Love Rollercoaster" with profound, Dylanesque lyrics? Here—I'll make up something sensitive and thoughtful, and you sing the words to the "Rollercoaster ... of love" part of the melody:

Doesn't quite work, does it?

Which leads to a realization. It takes a special kind of talent to write mindless words that simply feel good to sing along to. That sounds sarcastic, but I don't intend it that way. For all the songs I've written, I'm not sure I'm capable of something like "Love Rollercoaster."

It might be worth trying someday. Challenges like that are a good way to avoid falling into a creative rut. The irony is that it would be ten times harder for me than writing something intelligent.

And for my trouble, Don and others like him would assume I'd gotten lazy.
Posted by cinderkeys at 1:20 AM 5 comments:

Requiem for a day job

Effective three weeks from now, the company I work for will no longer be doing its creative work in-house. My position will go away.

This didn't happen, I was assured, because they were unhappy with the quality of my work. If I want to become an independent contractor and take on my own clients, they'll feed me as many jobs as they have—as many as I can handle. But my days of full-time employment are, for the time being, over.

* * *
Three years ago, I wrote a wistful post about how the day job was sucking up all of my time. It got in the way of my ability to practice, to rehearse with the band, to gig ... But as an Adult With Responsibilities, I never seriously thought about giving it up. Aside from the fact that I quite liked my job, a steady income was nothing to sneeze at, especially in this economy.

Now that the choice is made for me, I'm caught between conflicting emotions. On the one hand, there's the sadness you'd expect to feel over the loss of a job, the fear of not being able to make ends meet. On the other hand, there's curiosity and excitement about what I might do with my newfound extra time and flexibility.

The band could tour.

Newfound extra time and flexibility don't guarantee we'll take our act on the road, of course. I have other responsibilities that make it difficult to leave Tucson. And maybe no one will want to hire us—that happens to misunderstood geniuses a lot.

But we could try. We could at least try.

Also, there will be more time for ME/CFS advocacy. I'd like to volunteer my services for the Whittemore Peterson Institute, though I'm not sure if I have any skills they need.

* * *
So, goodbye for now to routines, to the assurance of financial stability, to waking up around the same time every morning. Goodbye to daily face-to-face contact with coworkers, though I'll see old officemates now and again when I go back to pick up materials. Goodbye to work and home being two different places.

Hello to new possibilities, some of which I haven't yet imagined.
Posted by cinderkeys at 9:22 AM 3 comments:

The sequence of events occurred thusly:

Weird Al Yankovic had a great idea for a new parody song: "Perform This Way," riffing on Lady Gaga's "Born This Way." His people contacted Lady Gaga's people to ask permission. (Legally, he can record and sell any parody he likes, but he always asks.) Gaga's people said she'd need to hear the song before she said yea or nay.

He sent them lyrics. She still needed to hear the actual recording. He recorded the song and sent it. The verdict: no.

Annoyed that they'd let him waste all that recording time, Weird Al uploaded the song to YouTube. Which is how Lady Gaga came to actually hear "Perform This Way." She loved it. Her manager apologized for not sending her the song and for speaking on her behalf.

Here's the long version of the story, in two parts, from Weird Al himself:

What was Gaga's manager thinking? That he had to protect his client from the bad publicity? That Gaga's fans would hear the song and go, "Gosh, I've enjoyed this woman's music a whole lot, but now that Weird Al points it out, her stage persona is rather outlandish. Funny how I never noticed that before. Perhaps I should spend my hard-earned money on a performer who doesn't wear meat."

Or, maybe the manager believed that the song would offend Gaga's delicate artistic sensibilities, and it was his job to protect her. Because a performer who calls herself "Lady Gaga" couldn't possibly have a sense of humor about herself.

Show business is weird.
Posted by cinderkeys at 10:10 PM 2 comments:

A week or so ago in Songwriting Scene, Sharon Goldman talked about why she writes songs, and she invited her audience of songwriters to do the same. Responses included:

To emulate other great musicians.

To process and express emotions.

My answer was, To say things in a way I couldn’t in any other medium. To make connections. To make sense of things.

All true. All important. Yet, taken together they felt incomplete.

Today, while catching up on old blog posts, I ran across this from Hugh MacLeod of GapingVoid.com: 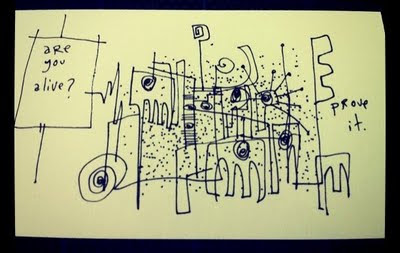 When I write, I make something exist that didn't before. Noticing that a thought or idea could become a song, finding words and melodies and building on them, piece by tiny piece ... nothing else in the world feels like that feels.

Though I hadn't thought of it exactly this way before seeing Hugh's cartoon, bringing a song into being proves I'm alive.

What do you do to prove you're alive?
Posted by cinderkeys at 12:26 PM 8 comments:

Today I spent a little time at the Fourth Avenue Street Fair. A T-shirt artist by the name of Jodi was there, which made me happy because I'd bought one of her shirts the last time around and wanted more from her. We started chatting as I made my selections. She asked what I did for a living. I told her a little about my day job, and then mentioned that I was in a band. I dug through my purse, handed her a shrink-wrapped CD, and said, "This is us."

She proposed an exchange: our CD for a T-shirt. Done and done.

This is her website. Pretty cool, eh? Here's hoping she thinks our music is worthy of her art.

* * *
Note: Funnily enough, my other perks of musicianhood post also involved the Fourth Avenue Street Fair.
Posted by cinderkeys at 12:31 AM 3 comments: