At long last, the travesty known as the PACE trial has been debunked, and the ME community is in a celebratory mood.

Don't have the slightest idea what I'm talking about? Lemme back up.

Every now and again for the past eight years, I've been writing posts on this little band blog about a disease called myalgic encephalomyelitis, aka ME, aka ME/CFS, aka "chronic fatigue syndrome." Symptoms commonly include chronic, debilitating pain; greater susceptibility to fatal cancers and heart failure; crushing exhaustion that isn't relieved by rest; and post-exertional morbidity, in which symptoms get worse after even mild physical exertion.

(Remember the bit about post-exertional morbility. It will become important soon.)

Because the cause of ME is unknown, many doctors have written it off as being all in the person's head. Back in 2011, a group of UK researchers championed that belief, theorizing that ME develops like this:
Their proposed solution: Get ME patients to exercise just a tiny bit, then increase the amount of time they devote to exercise in tiny increments. Eventually they'll realize that exertion won't hurt them and they'll get over it. In the meantime, therapy will help them challenge their supposedly false illness beliefs.

And so they tested their hypothesis in a study they called the PACE trial. The results (they said) supported their claims. Significant numbers of people (they said) recovered after receiving graded exercise therapy (GET) and cognitive behavioral therapy (CBT).

Great news, right? But actual ME patients were angry. They knew from experience that if they tried to exert themselves past a certain point, they would feel a lot sicker (see "post-exertional morbidity" above). GET was the worst thing they could try.

Further, the methodology was hinky. While a number of flaws graced this study, I'll focus on just one: the definition of "recovery." Before the trial began, the researchers decided how healthy the subjects had to be after treatment for them to count as recovered. After the trial ended, the researchers changed their definition of recovery to include sicker people.

The result: some subjects who were sick enough to get into the study in the first place would count as "recovered" at the end, even if their health remained exactly the same.

The more science-savvy members of the ME community asked to look at the researchers' data so they could do their own analyses. The researchers—some of whom happen to have financial ties to disability insurance companies—refused to give it up.

And that's how things stood until October 2015, when journalist David Tuller published a huge article exposing all the flaws. Finally, parties outside the ME community started paying attention. More people requested the data. An ME patient named Alem Matthees forced them to release it through a freedom-of-information request. He and some other patients did analyses on it and came to a SHOCKING conclusion about the study:

Yeah, turns out that when you don't move the "recovery" goalposts, neither GET nor CBT have a significant effect.

So the travesty known as the PACE trial has been debunked, and the ME community is in a celebratory mood.

Now let's fund some real science, shall we?

Posted by cinderkeys at 3:47 AM No comments:

Dancing in the Bookmans, part 2

Sometimes the best part of a performance is the goof you almost made but didn't.

While playing our cover of "Miss You" by the Rolling Stones, I flashed back to a video I saw a day or two ago: Mick Jagger and David Bowie's "Dancing in the Streets" with the music removed.

It's hard to sing when you're trying not to laugh.

Here. You have GOT to watch this.

Posted by cinderkeys at 11:09 PM No comments:

Dancing in the Bookmans, part 1

While playing at Bookmans on Speedway, a crowd of young people dance-walked past us along with the music. I couldn't tell if they were genuinely grooving or if they were making fun of us. The song, Ten Years Later, is kinda sappy, not the sort of thing I imagine the yoots dancing to, so I had to wonder.

Later, though, somebody who came to see us said she saw those kids dancing to other songs earlier, and they seemed really into them. Cool! 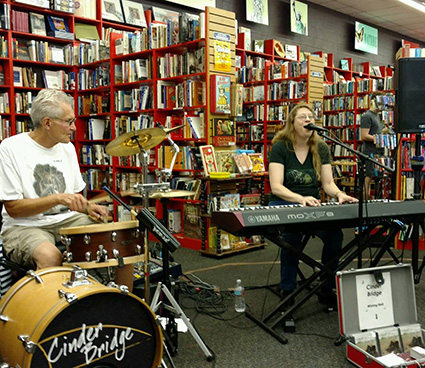 Ron and me at Bookmans, not the Bookmans on Speedway where we just played, but a different Bookmans because we didn't get any pics of us at Speedway
Posted by cinderkeys at 11:01 PM No comments: