We participated in another multi-band holiday benefit that day. As I've mentioned before, I like doing benefits. And this one helped out the Community Food Bank, a great cause that's in dire need of the funds. So why "problem"?

Back when we were invited to this shindig, Ron the Drummer pointed out that they'd probably want us to play holiday songs at a holiday show. I sent a message to the organizer, Rik of Tucson Rock Alliance, and asked him.

Rik said they'd like everybody to learn at least one holiday cover.

And that is why, on December 18, even though I spend every holiday season complaining about holiday music being crammed down our throats, we played a rousing, jazzed up version of "Oh Hanukkah" and a highly abridged version of "The Linus and Lucy Theme" from A Charlie Brown Christmas.

That doesn't count as selling out, though, right? Supermarkets never play "Oh Hanukkah," Not even the Barenaked Ladies version.

And "Linus and Lucy" by the Vince Guaraldi Trio rocks no matter what holidays you celebrate or what music you like.

* * *
Happy Hanukkah, everybody. For those of you who have never celebrated it, it starts on the 25th day of Kislev in the Jewish calendar. This year, that's sundown tonight.
Posted by cinderkeys at 10:27 PM No comments: 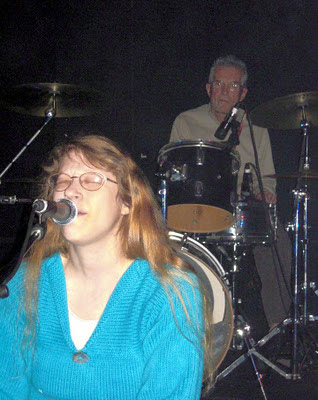 * * *
Thanks to Don Martin for taking the photo, and for letting us pilfer it.
Posted by cinderkeys at 8:50 PM 3 comments:

Cinder Bridge is doing a couple of benefits this month. The first one, on Saturday, December 10, is Gift of Love, a Christmas toy drive.

In addition to being a good cause, Gift of Love has introduced me to a term I wasn't familiar with. The print is probably too small for you to read here, but there's a note about the dress code on the poster:

This is an exclusive "grown and sexy" event
Dress to impress

I'd never encountered "grown and sexy" before. Maybe that's because I'm out of touch with the new and happening slang. Or, maybe it's because I've been living in Tucson, the capital of casual, for too long. At any rate, I made a mental note to dress up. And then it hit me ...

There's a reason I wear jeans and sensible shoes to gigs. I mean, besides the fact that I wear jeans and sensible shoes everywhere it's permissible to do so. Gigs aren't just sauntering onto the stage and playing. They involve much hauling of equipment. This is not something easily done in a dress and shoes that are designed to be worn with a dress.

I might be able to pull it off with slacks. But jeans are just better when it comes to manual labor. Before the fashion industry noticed that jeans existed, that's what jeans were for.

So, Ron and I look forward to seeing the audience decked out ... but we'll be dressed as the working class heroes we are.

* * *
Just in case you're in the vicinity and can't read any of the fine print on that poster, here's the relevant info for Gift of Love.

For a while now I've had a theory that someone must like Christmas music. Well, I found him! Here he is!

On a related note, I have a request for Whole Foods, which seems to have gone from throwing a few Christmas songs into the playlist to doing all Christmas all the time. If you must torture those of us who aren't into this genre, could you at least ease up on "Santa Claus Is Coming to Town"? Two versions of it in a row is a little excessive.
Posted by cinderkeys at 12:28 AM 3 comments: