A lot of my songs are about change. Specifically, about how change is scary, and what people will do to avoid it or put it off ...

... Which, when you think about it, speaks to what a sheltered life I've led. 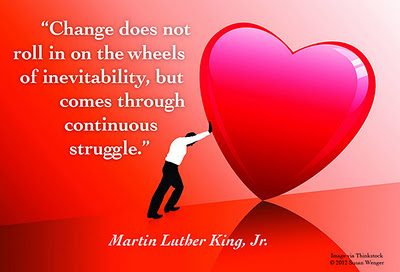 Only people born to a life of relative privilege have the luxury of fearing change. Those treated less kindly by the status quo hope for it—or fight for it.

Have a good Martin Luther King Jr. Day.
Posted by cinderkeys at 12:05 AM 2 comments:

One year ago in Tucson, a gunman killed six people and wounded thirteen at the Safeway plaza on Oracle and Ina. Among the wounded was congresswoman Gabrielle Giffords. Mistakenly declared dead in initial news reports after she took a bullet to the head, she has made amazing progress in her recovery. A contributing factor: music therapy.

Giffords still struggles to speak in sentences, but she has much less trouble singing. An important part of her therapy now involves singing songs she knew before the shooting.

The ability to speak is mainly controlled by two areas on the left side of the brain. But when we sing or listen to music, wide swaths of both sides of the brain become active. Doctors have learned putting words to melody stimulates memory and helps a damaged brain recover the ability to process language.

"And the idea is that can maybe be used as a proxy or as an alternative," said Dr. Michael Lemole, who was Giffords' neurosurgeon. "Just take away the music part and all of a sudden now you're stringing words together in a sentence.

Still, the idea that singing can help people remember how to speak makes sense to me. Very simple phrases have a lot more emotional impact when they're set to music in just the right way. Singing marries thought and emotion. Songs help us feel what we're thinking and understand what we're feeling.

Everybody needs music therapy once in a while.
Posted by cinderkeys at 12:01 AM 6 comments: