There was a bit of confusion today when we arrived at HOPE Animal Shelter. The area where we were supposed to play was taken up by tables with food, raffle stuff, and other goodies. After some brainstorming, somebody figured out that we'd fit in the corner. 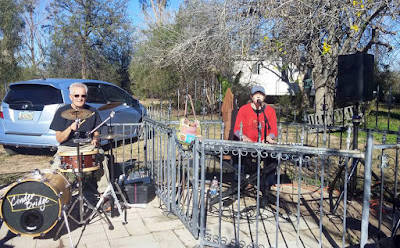 "HOPE has adoptable animals," I announced between songs. "Ron is a drummer-sound guy mix, and for a reasonable donation, you can take him home today. I'm a keyboardist-singer mix, but they need to spend more time socializing me, which is why I'm in the enclosure."

Ron is no longer available, having returned to his forever home with his wife and many cats. If you're looking to adopt a quadrupedal animal, however, HOPE is still a great place to go.
Posted by cinderkeys at 6:15 PM 2 comments:

I'm out with a few friends from a professional association, and one of them asks me how things are going with the band. I tell her about our Fountains gig. I recount how they were playing oldies from KTUC-AM on the speakers, and how it made me think about what they'll be playing when I'm ready for the old folks' home.

"KTUC," one of my friends says. "Isn't that the really conservative oldies station?"

Huh. I have no idea what the station's political leanings are, but come to think of it, they do play a very specific kind of old music. I look up their playlist later online. Here are a few of the songs they've broadcast tonight:

You get the idea: oldies lite. There's no "Splish Splash," no "Rock Around the Clock," definitely no "Louie Louie," for damn sure no "My Generation."

If a station like this is around when I'm in my 90s, they won't be playing REM. They'll be playing Boyz II Men.

Kitchen chores beckon. Some people love to cook. I'm not one of them. To relieve the tedium of food prep, I decide to listen to an album as I chop and fry and clean. I pick REM's Automatic for the People because one of its tracks has been going through my head for the past few days.

It occurs to me that this album is more than two decades old. When I was a kid listening to the radio in the '70s and '80s, the stations that played '50s and '60s music were oldies stations.

That doesn't seem right. 1992 feels like three lifetimes ago, but when I hear "Man in the Moon" it might as well be three days. For all it belongs to a distinct era, it doesn't sound nostalgic.

I had a similar line of thought last week when Ron the Drummer and I performed at the Fountains, an assisted living facility on the northwest side of town. Oldies station KTUC 1400 played on the speakers as we set up and broke down. The music of our audience's youth. What will nursing homes be playing when I move into a place like this? The Talking Heads? Nirvana? Sir Mix-a-Lot? Will those bands sound as hopelessly out of date to the visiting grandkids as Tony Bennett does to my generation?

Posted by cinderkeys at 3:35 PM No comments:

How to take a compliment

After a short performance tonight, an audience member came up to me and told me she'd enjoyed our set. The rest of the exchange went something like this.

Score one for knowing when to keep my mouth shut.

(P.S. I bought Jagged Little Pill in in 1995 and quite liked it, but as an artistic type I reserve the right to be neurotic about everything, including nice stuff people say about me.)
Posted by cinderkeys at 1:09 AM 2 comments:

"I really enjoy working on problems that others think are unsolvable."

Another year, another ME/CFS Awareness Day, and we STILL don't have a cure. What's up with that?

(If you have no idea what ME/CFS is, this awareness-day post from a few years ago will catch you up.)

I've been feeling discouraged about the lack of progress toward a cure, which is a big reason you haven't seen one of these ME/CFS posts in a while. But a new organization has provided a tiny glimmer of hope:

The board director, Ron W. Davis, is the director of the Stanford Genome Technology Center. His son suffers from a severe case of ME.

James Watson—one of the guys who discovered the structure of DNA—is also on the advisory board.

You can donate here.

Hopefully we'll have more good news to be aware of by next year's Awareness Day.
Posted by cinderkeys at 6:49 PM 2 comments:

The article I linked to says that people started speculating on Manilow's marital status several months ago, after he started wearing what looked like a wedding ring. Various articles say that while he's extremely private about his love life (understandably), he isn't in the closet.

And he shouldn't be. I mean, nobody should be, but Barry Manilow fandom is one of the last places I'd expect to find rampant homophobia.

With all the awful stuff going on today, it's nice to think that some corners of the world are becoming more accepting, one married couple at a time.

Posted by cinderkeys at 12:20 PM No comments:

Hi! Nice to see you again. It's been a while, huh. Between everything and everything else, I keep forgetting that this blog exists.

But I didn't pop back in to talk about how much I suck at blogging. I'm here to announce that the Tucson Kitchen Musicians Association sent out their selection results for the 30th Annual Tucson Folk Festival today, and Cinder Bridge is playing on Sunday, May 3, 1 p.m., at the Courtyard Stage. ALSO, I made it into this year's Songwriting Competition.

Now I just have to remember which songs I submitted to the songwriting contest ...
Posted by cinderkeys at 7:54 PM No comments: