92.9 KWMT switched formats last week. Since the end of 2003, they had called themselves "The Mountain" and played AAA (adult album alternative) music, which included stuff on the fringes of mainstream pop/acoustic rock. But over the years their playlist became increasingly more bland, and now they've finally made the leap to hot AC (adult contemporary). Basically mainstream pop music from the 1980s on up. It's very bright and happy now, and even more bland.

Yeah, I know. You're probably not in Tucson and don't care. None of this would be worth mentioning except that a few years ago, I could imagine Cinder Bridge songs on the Mountain. Now, even if we managed to hit the big time and get on commercial radio, I don't see them touching our fringier or slower tunes.

Oh well. At least KXCI Community Radio is still around.
Posted by cinderkeys at 6:12 PM 6 comments:

Hey, maybe the Occupy movement can add this to their list of demands. 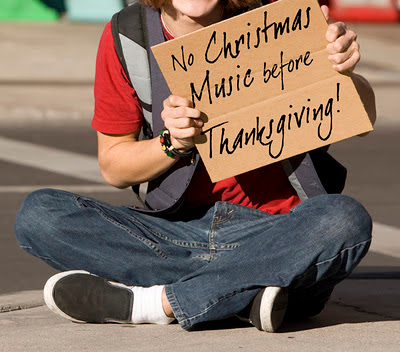 Sweat 'til you get wet

Discovered a new open mic jam today. It's every Sunday at a place called Beau Brummel Club, less than two miles from where I live. I don't go to open mics much anymore, as I stash my keyboard at Ron the Drummer's house, but the guy who runs this one said there'd be a keyboard available to play. Sold.

I played a Cinder Bridge song by myself. I played another Cinder Bridge song with a couple other musicians jamming on it with me (they'd never heard it before). Instead of selecting another original for the finale, I decided it would be more fun to just jam out on something improvised. A whole bunch of other musicians took the stage, I asked somebody to pick a key, and off we went.

Here's the impressive part. One or two guys actually sang parts of the improvised piece.

I can't even imagine how you do that. Yeah, the lyrics were goofy, with a lot of repetition, but I still don't get it. When I jam on the keyboard, all I have to know is what chord I'm supposed to be playing. Because I have to stay within the parameters of that chord, I have some guidance. But lyrics could be anything at all.

The only words I remember from our jam (retroactively titled something like "Ladies Don't Like to Take Showers") were "Sweat 'til you get wet." Not profound, but pretty clever for being dreamed up on the spot.
Posted by cinderkeys at 12:07 AM 1 comment:

On a more lighthearted, yet much louder note, 11/11/11 is also Nigel Tufnel Day. 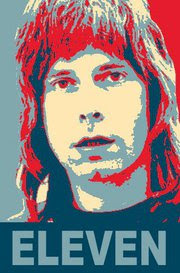 If you don't get it, you have to rent This Is Spinal Tap. Immediately.
Posted by cinderkeys at 9:37 PM No comments:

Jerry strummed the first few chords of his next song. To his right was Mike, another guitar player. I sat behind him at Duncan Stitt's keyboard. We were sharing the stage at a songwriters' open mic.

He did—a lovely, wistful breakup tune. When he finished, it was my turn again.

"Like the last song, mine is also a sad tale, filled with regret," I said, and launched into Quicksand.

* * *
It was a running theme. Every time one of the performers played something that wasn't cheerful, they would point it out. As if music is by default happy and upbeat, and anything that deviates from this requires an apology, or at least an explanation.

I'm not sure why. Songs are meant to convey a full range of emotions. Sadness is kind of an important one. And when I'm feeling down, the last thing I want to do is listen to music that tries to convince me all is right with the world. I seek out something that suits my mood. Only after a few sad or angry songs am I ready to consider anything more upbeat.

So why were we defensive about what we'd written?

Do some listeners conflate "sad" with "low energy" and "boring"?

Have we as a society bought into positive thinking to such a degree that we don't want to acknowledge negativity even in our art?

What do you think? Do you avoid sad songs? If yes, why?
Posted by cinderkeys at 8:59 PM 6 comments:

Over the years, I've come to doubt the existence of psychosomatic illnesses. People like to believe in them. The idea that our mind can make our body sick is intriguing, and besides, it provides an easy explanation for all those inconvenient ailments that haven't yet been diagnosed, or even discovered. Problem is, nobody seems to have taken the trouble to prove that emotional stress can manifest as physical symptoms.

Every once in a while I get into a debate with somebody about this. While they allow for the possibility that "psychosomatic" is at times shorthand for "I don't know what's wrong with you and don't want to tell you that," they believe that psychologically induced illnesses can happen. They aren't experts in the field or anything; they just think it's intuitively obvious.

For those people, here's a quote on the subject from a licensed clinical psychologist who's been practicing for over 25 years:

Physicians have referred many people to me before they had a diagnosis, even doctors who don’t know what else to do for their patients. ALL of them eventually received a medical diagnosis. That’s right. ALL OF THEM.

My opinion on psychosomatic illness can be swayed by real evidence—evidence that amounts to more than "We've ruled out everything else we happen to know about." 'til then, true believers, the burden of proof is on you.
Posted by cinderkeys at 10:11 PM 3 comments: