My driver's license has been suspended.

The chain of events leading up to this predicament began back in February, when I got pulled over for not having renewed my registration. The cop told me he was writing it up, but that nothing bad would happen as long as I got it taken care of immediately. I hauled ass to the emissions place, renewed online, paid the late fee, and got on with my life.

Apparently I was also supposed to inform the City of Tucson that I had done this. Oops. On top of that, the Motor Vehicle Division of Arizona (I realized) had never sent me my proof of registration, which I needed to get my license unsuspended.

Like so many people, I've become ridiculously dependent on my car. A decade ago I could get most of the places I needed to go on my bicycle. No more ... and time constraints have made it such that I don't even go to places in biking distance on my bike now. My bike requires repairs before it's even rideable.

Which sucks on days like today, when you're not allowed to drive and you need to go to the pharmacy.

Before I tried calling around to see if any friends could take me, it occurred to me that the pharmacy wasn't really that far. I Google-mapped it. 1.7 miles each way.

Fine. I would walk. But I was not happy about it. I had things I desperately needed to get done, and this was going to turn a quick-and-dirty errand into a rather long one.

I set out in the late afternoon. Just a few feet from my driveway, I thought, the song.

Oh yeah! There was a song I'd been working on for many weeks, or perhaps I should say not working on. After a few cool lines that made me happy, I was completely stuck.

In the early days of my songwriting, I had thought up most of my lyrics while on my bike. Walking worked just as well. Maybe I could scratch out a line or two, and the time suck wouldn't be a total waste.

Creative juices still flowing, I wrote seven more after I got home.

You have to understand, this never happens. One or two new lines in the course of a day is a really good day for me. This is true even though I have set periods of time where I have to do something tedious (cooking) and can think about writing without having to procrastinate something else. Getting my body moving shook something loose somehow.

The funny thing? When I got home, I checked my mailbox. The MVD had sent my proof of registration. If I'd known it was going to arrive so fast, I probably would've waited for it, then risked the short drive with my new tag on the car. I'm so glad I didn't.

Guess I need to lose my license more often.
Posted by cinderkeys at 12:20 AM 2 comments:

A bit of news for ME Awareness Day

May 12 is ME Awareness Day! What is ME, you ask? It's a disease. Read this and become aware.

One of the most important symptoms is post-exertional neuroimmune exhaustion. It means the other symptoms—pain, debilitating exhaustion, etc., get worse after physical or mental exertion and require an extended recovery period.

A study published last month may shed some light on why post-exertional neuroimmune exhaustion exists:

The cells from ME patients produced on average 20 times as much acid when exercised, suggesting an underlying cause for the aching muscles that patients often experience as soon as they begin to exercise.

(Interpret "exercise" to mean any physical exertion, not exercise like pushups.)

Here's hoping for more progress by this time next year.

A poignant moment between bandmates just before the songwriting contest

Ron the Drummer: "So are you ready?"

Ron: "Are you really sure?"

Labels: Ron is messing with me, Tucson Folk Festival Songwriting Contest
Email ThisBlogThis!Share to TwitterShare to FacebookShare to Pinterest 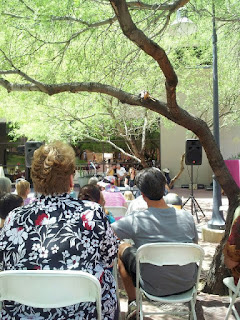 Posted by cinderkeys at 9:30 PM No comments:

When I first had visions of starting my own band, I had no idea what the band would be called. I just knew I didn't want it to be my name. A band's sound reflects the contributions of all its members. Calling us "Susan Wenger and the Disturbed Unicorns" (or whatever) would deny those contributions.

The decision has served Cinder Bridge well. It only becomes inconvenient at events like the Tucson Folk Festival Songwriting Contest, where the songwriters enter under their own names. My hope is that audience members who have never heard of us will like the two songs I play and buy our CD at the festival's Kitchen Store. But our CD will be filed under Cinder Bridge. Oops.

My plan had been to ask the people running the Kitchen Store to file half of our CDs under "Cinder Bridge" and the other half under my name. I'd slap labels on the "Susan" CDs so searchers wouldn't get confused. The Kitchen Store people had a better idea: They'd have a "Susan Wenger" card in the Ws, and on it they'd write "See Cinder Bridge." If they filed our CDs under both the band name and my name, one group might sell out, and people who looked for us under one name wouldn't know to check the other.

Works for me. I'm for anything that tells people to see Cinder Bridge.
Posted by cinderkeys at 12:45 AM No comments: