A room full of keyboards

In the middle of a shopping run, I made a brief side trip to a Guitar Center to see if someone I knew was working there. She wasn't, but while looking for her, I happened upon the room with all the keyboards. I can never resist a room full of keyboards. I had a blast trying a bunch of them out, improvising little snatches of music to get a sense of the sound and feel.

I focus a lot on what about my playing needs improvement. Sometimes it's nice to remember how lucky I am, what a kick it is, to be able to sit down at a keyboard and just start playing. Thanks for all those lessons, Mom and Dad. :)
Posted by cinderkeys at 1:14 AM 1 comment:

The price of a song, the value of a cause

Back when I first talked to the RESCIND guys about letting them use "Everybody Knows About Me" to raise money for ME awareness/research, the assumption was that they'd put a buy button up for $5 or so. Jerry, the webmaster, is the one who came up with the idea of letting people donate anything -- or nothing. He didn't believe people would stiff a charity. I thought this a little naive, but it didn't matter. The people who donated larger amounts would hopefully compensate for the freeloaders.

Yesterday, Jerry e-mailed me with the news that "Someone thought the song was worth $20!"

So cool. Of course, what he really meant was, someone thought the cause was worth $20. I'm pretty sure nobody would pay that much for a song, regardless of how good it is.

For fund-raising purposes, I hope RESCIND gets as many of those big donations as possible. But for awareness-raising purposes, I'm interested in the people who don't know or care enough about ME to part with more than the obligatory dollar or two. Maybe now I'm the one who's being naive, but I hope they listen to "Everybody Knows About Me" and come away with a better understanding of what it's like to suffer with the illness, and why it's not okay to dismiss it as "yuppie flu."

P.S. Thanks to all the readers here who donated. You rock!
Posted by cinderkeys at 11:59 PM No comments:

Labels: cfids, chronic fatigue syndrome, Everybody Knows About Me, ME, yuppie flu
Email ThisBlogThis!Share to TwitterShare to FacebookShare to Pinterest

Everybody Knows About Me: Released!

"Everybody Knows About Me" -- the fully arranged, polished version -- is now available:

Ron and I are letting RESCIND, a CFIDS/ME awareness site, use our song to help raise money for the cause. The deal is, you can download "Everybody Knows About Me" for free, and if you think the song and/or the cause is worth it, there's a donate button at the bottom of the page. You choose how much you want to donate.

(If you're wondering what on earth CFIDS/ME is, you can find a brief summary here.)

Eventually "Everybody Knows About Me" will also be available on places like iTunes, and hopefully other CFIDS/ME sites will feature it as well. But if you donate here, all proceeds go to RESCIND's "friend raiser."
Posted by cinderkeys at 1:29 AM 5 comments:

Labels: activism, cfids, chronic fatigue syndrome, Everybody Knows About Me, ME
Email ThisBlogThis!Share to TwitterShare to FacebookShare to Pinterest

Retroactive justification for a rare night out

I wasn't supposed to go out Friday night. Too many things to do. So when I drove myself to Frog and Firkin to see a Nobody, et al., a band I'd found on Myspace a few weeks ago, it was with a sense of getting away with something -- playing hooky from real life for a while.

By the time I arrived, F&F's patio was packed to the gills. I parked myself on the steps to the indoor entrance and listened to the band, waiting for a seat. One by one, people at a large circular table began to vacate. I bided my time, rushed the table as the last person left, and reached it just as a party of six women came to claim it. An awkward moment lingered until one of them took pity on me and invited me to join them.

So, in addition to good music, I had fun talking with my tablemates during the break. Susan, the woman who had extended the invitation, thought she recognized me, and we came to the conclusion that she must have seen me at a Cinder Bridge gig. I ended up passing a copy of our CD around, and signed two people in the group up for our mailing list.

I also got to talk to a couple of Nobody, et al. members who, as it turns out, remembered Cinder Bridge from Acoustic Battle of the Bands. I signed one of them up for our list too.

So, yeah. I wasn't blowing off my responsibilities. I was networking and promoting our band. Yeah, that's it!

P.S. The boys in Nobody, et al. sound just as good live as they do recorded. If you live in Tucson, I highly recommend that you check them out.
Posted by cinderkeys at 1:33 AM 3 comments:

What cross? What ballpark?

In response to my recent musings on lyrics that might or might not mean something, a regular reader of this blog (okay, my mother) e-mailed me to say I'd reminded her of an interview with Paul Simon. Someone had asked him about a line from "The Obvious Child" that goes, "The cross is in the ballpark." In context:

He said it didn't mean anything. He just liked the sound of it.

There are songs for which the sounds-cool/actually-means-something distinction doesn't matter so much. Take "I Am the Walrus." Sure, the lyrics seem to be dripping with symbolism, and maybe I would have analyzed them to death if I'd been around when they were new, but now they're just big goofy fun. "The Obvious Child," on the other hand, skims the seas of purpose and intention just enough to make me wonder if I'm missing something.

How about you? Can you think of a song whose meaning has eluded you for ages? Does it bug you to think there might be nothing there?
Posted by cinderkeys at 12:07 AM 4 comments:

But it sounds cool

When I was a senior in high school, a friend of mine dashed off some lyrics to a piano riff I'd been playing with. The resulting song -- all about the evils of materialism -- was quite good. All it needed were a couple of lines at the end, something that would rhyme with "... never is enough." I volunteered the following:

Larry liked my little contribution, so it stayed. I was pretty pleased with it myself. Just one thing bugged me. The lines sounded cool, you know, like they meant something profound. But when I really thought about it, the "bribed" part didn't make any sense. Bribed yourself to do what? What I was really getting at was something like "distracted," but that word didn't scan.

No one else seemed to notice when Larry and I played the song for them, though. Because it sounded cool.

I thought of this earlier today while listening to Porcupine Tree's In Absentia. During previous plays I'd never paid much attention to their lyrics, which sort of got lost in the gestalt of the band's engrossing and echo-y prog rock sound. This time around I had headphones on, and I decided to see if the words would be easier to make out.

They were. I found myself grooving to the chorus of "Blackest Eyes":

I got wiring loose inside my head
I got books that I never, ever read
I got secrets in my garden shed
I got a scar where all my urges bled
I got people underneath my bed
I got a place where all my dreams are dead
Swim with me into your blackest eyes

I love that last line! I also am not entirely sure what it means. In the context of the song I can come up with a couple of vague ideas, but I don't know if either of them are correct.

Had I never attempted writing lyrics, I would hope that I'd someday become clever and sophisticated enough to decipher the meaning of these deep words. Now I wonder if Steven Wilson, the songwriter, even knows. Maybe he just thought it sounded cool.
Posted by cinderkeys at 8:53 PM No comments:

Cover art for "Everybody Knows About Me"

When we first started making plans to get awareness-raising song "Everybody Knows About Me" out there, I never gave any thought to artwork. We weren't going to release a whole album; we were only going to make the one song available as an MP3 through sites like iTunes and Amazon.com. No physical product to slap a cover on, no cover art.

My logic made perfect sense until I remembered that iTunes et al always displayed covers next to their wares. I didn't know if they absolutely required a visual, but the buy page might look strange without it.

At around the same time, I discovered RachelCreative, a blog by an artist who has CFIDS/ME. While paging through her old posts, I discovered a self-portrait that she doodled "after an irrational flush of frustration." I contacted her, one thing led to another, and ... 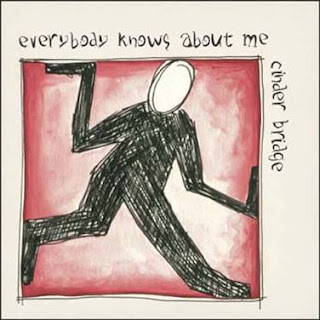 I love the rawness and the energy of this piece. I also love how it thumbnails -- that is, how it will look when displayed in search results:

It will take around four to six months for "Everybody Knows About Me" to start showing up on the usual download sites. We'll let y'all know the hot second it's available. In the meantime, I'm just going to stare at the "cover" art and grin a lot.
Posted by cinderkeys at 10:55 PM No comments: