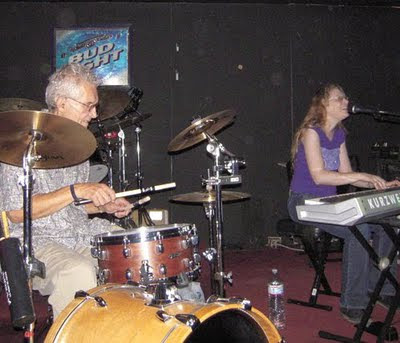 Ron and Susan at the Concert to Aid Victims
of the Southern Arizona Fires. Photo by Don Martin

As a member of one of the bands that provided entertainment, I thoroughly enjoyed myself. How could I not? I got to get up on stage with Ron the Drummer, sing a bunch of songs, and play rock star for an hour and change. For this we earned a mountain of gratitude—as if doing what we loved were some kind of sacrifice.

Later that night I talked with Amy Mason, one of the main organizers, about how impressed I was that she could pull off an event of this magnitude within a week. She has a knack for this sort of thing, though, and she loves to help people. As she put it, everybody has something to contribute.

The whole thing reminded me of this:

If you can't spare the five minutes to watch, here's a summary. After training extensively to become a service dog, Ricochet had to be dropped from the program because she wouldn't quit chasing birds. Her trainer was disappointed ... until she realized that Ricochet had a talent for, of all things, surfing. Now Ricochet surfs to raise money for charity, and she is much more joyful and focused.

The takeaway message: Critters of all species do better for themselves and for others when we let them be who they are.

Unfortunately, if you're a critter of the two-legged variety, life doesn't always work out this way. Last night I got to do what I love for a good cause. Today ... let's just say I spent a lot of time chasing birds. There is no benevolent master to tell me I'm exempt from all the stuff I'm not good at. No way to meet all my obligations by doing the one thing I happen to like doing.

So I'm grateful for the moments when I can be who I am. Especially grateful when everyone around me is cool with who that is. 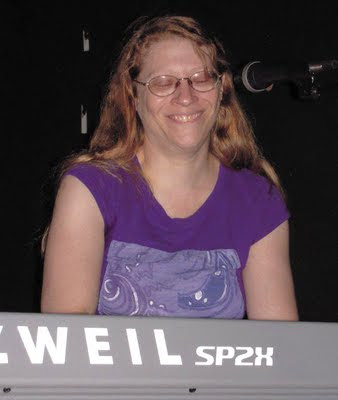 Susan of Cinder Bridge, looking far too pleased with herself.
Photo by Don Martin.
Posted by cinderkeys at 1:50 AM