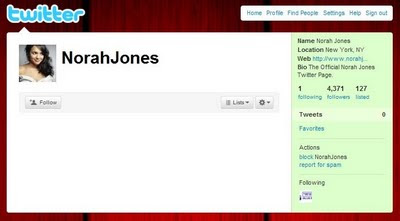 For the Twitter-impaired, that means 4,371 users are reading her tweets (or would be if she had any), but she's only reading one user's tweets.

Norah Jones, if you're reading this (which you're not, but whatever), here's some free advice:

If you want to use Twitter like a giant megaphone, you're doing it wrong. The idea is to follow the fans who follow you and listen to them at least as much as you talk to them. Engage in some kind of dialogue ... inasmuch as you can have dialogue 140 characters at a time.

More to the point, this will cure your virtual stage fright forever. Once you see what most tweets look like, you will never worry about coming off dorky again.
Posted by cinderkeys at 12:05 AM