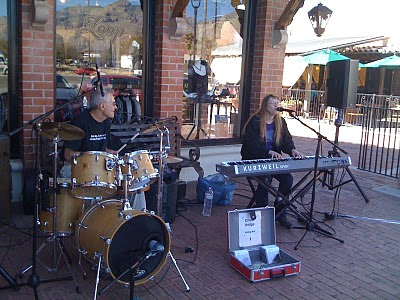 Between songs at Saturday's Paws in the Plaza gig, one of the friends who came to see us walked over and said that a camera guy for KOLD 13 had shot footage of us for B-roll. He set up his tripod while we were doing our cover of "Run-Around," then recorded "Everybody Knows About Me" in its entirety.

I missed it. I was absorbed in the music, and the guy wasn't in my line of sight. But apparently he liked us. My friend nodded to him when the recording was done, and he smiled and gave my friend the thumbs up.

They used a tiny snippet of our footage for their 5:30 newscast. Though I didn't see it (I don't have TV), I'm told that my vocals and Ron's drums could juuust barely be heard under the voiceover.

OK, maybe not yet. But two things please me.

Labels: gigs, Paws in the Plaza, TV appearances
Email ThisBlogThis!Share to TwitterShare to FacebookShare to Pinterest

Well hey now! In the era of reality television, extremes rule. So if you're either ultra-narcissistic, spray-tanned and covered in 100 tattoos and piercings, or dorky, you're golden. ;)

(Congrats on getting the thumbs-up! :) )

Ah, my hashword is "expat." How ironic.