The danger of efficient roadies 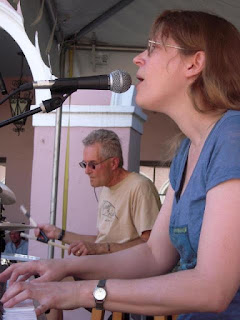 One of the biggest challenges of playing at the Tucson Folk Festival is the timing. Performer slots are only half an hour, and you have to spend part of that time hauling your equipment on and off the stage. There's supposed to be about 25 minutes of actual playing.

Even though we'd done this before, I couldn't remember how we got everything—Ron's entire drum kit and my keyboard, keyboard stand, and bench up there so quickly, leaving time to spare for plugging in and doing sound checks. But I knew we'd done it, so we meticulously plotted out our set list with that in mind.

At 2 p.m. on Saturday, we took the stage like greased lightning. Only then did I remember the key element that made this possible: the volunteer stage crew. I brought a couple of Ron's items up to his spot, and when I turned around, I saw two nice men carrying my keyboard and keyboard stand. Somebody else brought the bench. Nothing else for me to do except the very important tasks of plugging my keyboard in and putting the mic exactly where I wanted it. Sound checks followed promptly.

Then the MC announced that we were ready to start. And I realized that my bottled water—which I'd been planning to carry up with the bench that the nice men had carried for me—was still in back of the stage. There was absolutely no graceful way to run offstage and grab it.

I'm happy to report that our set went well. The crowd was a really good, happy, responsive crowd, and I managed to keep singing. But next time around, someone needs to remind me how awesome the Folk Festival volunteers are so I don't do that again.


* * *
Thanks to Don Martin for supplying the photo!
Posted by cinderkeys at 9:59 AM

You have no idea how right you are about the personal assistant. And not just for performing. If only I could afford to have somebody follow me around, help me with scheduling, and do all of the maintenance work that gets in the way of real productivity.

"If only I could afford to have somebody follow me around, help me with scheduling, and do all of the maintenance work that gets in the way of real productivity. "

We need to find one of our local friends who is looking for work and help him/her get set up as a roving concierge, doing that part time for multiple clients instead of full time for one. I can afford to pay for a few hours here and there, and they could efficiently combine errands and the like for a lot of things.