Saturday morning, 11:40, Brandi Fenton Park. I realized I'd left my water bottle at home, and trotted off to a booth that sold water so I wouldn't dehydrate for the afternoon's gig, a benefit for HOPE Animal Shelter. At the booth, I realized I had nothing in my pocket except my cell phone and a Cinder Bridge business card.

Huh. Must've left credit cards, driver's license, and money at home. Which was weird, because I remembered seeing them on the end table before stuffing the business card in my pocket.

The nice person at the booth said I should go up to one of the organizers, tell him I was with the band, and ask for water. I did, and we were up and running.

When I got home later that day, the first thing I did was check for my cards and cash. They weren't where I left them. I tore that area of my bedroom apart. No dice. Retraced my steps in the house, the driveway, the car, back to Brandi Fenton Park ... Nope.

Defeated, I called the credit card companies. The good news: no activity on any of the cards that day. So they probably weren't stolen. I had a hunch they were still somewhere in the house, and they'd turn up eventually. But I couldn't exactly wait the six months I thought it would take for that to happen. I cancelled my cards and figured that would be the end of it for a while.

The next day I did laundry. Cards and cash fell out of Friday's pair of jeans.

Usually that's the first place I check. I hadn't because I'd been so sure I'd seen them on the end table. Instead, I must have seen them not on the table, assumed I'd already pocketed them, and confabulated a memory of seeing them there.

Anyway. The gig itself went off without a hitch. Great cause. Beautiful day. Once again, I wish I could be spending all of my time doing music. I can do music. I'm not all that good at activities of daily living. 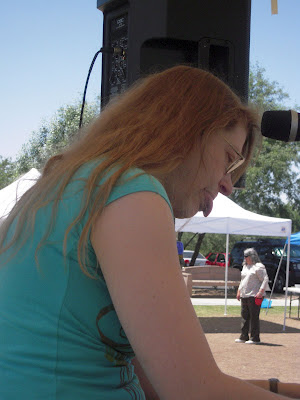 Thanks to Don Martin for the photo. I noticed him there with the camera while we were playing and struck this pose for his benefit. In retrospect, it was an accurate representation of my mental state.

Good day to you my friend. I needed to give you a quick note to express my thanks. I've been studying your blog for a month or so and have picked up quite a lot of good info as well as enjoyed the way in which you've setup your blog. I am attempting to setup my own blog but I feel it is too general. I want to focus more on specific topics. Being all things to all folks isn't all that it’s cracked up to be. Many thanks.